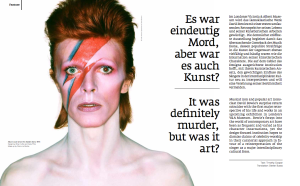 Musical icon and popular art iconoclast David Bowie’s surprise return coincides with the first major retrospective of his life and works in an exhibition in London’s V&A Museum. Bowie’s forays into the world of contemporary art have been as frequent and varied as his character incarnations, yet the design-focused institution hopes to dismiss claims of celebrity-worship in their curatorial approach in favour of a reinterpretation of the singer as a major interdisciplinary artistic force. In a short story written by David Bowie in 1999, Nathan Adler, a detective from a division of Art Crime Inc, examines the creative precedents of a grisly murder – from the fictional Viennese Castrationists to the hyperreal Hermann Nitsch – instead of the traditional procedure of looking for the culprit. His search for thematic influences takes Adler back to late 1970s Berlin, to whispered rumours of dark fashion-goons, and through to late 1990s Manhattan where he unravels a string of the victim’s associates that include a ‘tyrannical futurist’ and former convicts previously condemned for appropriation and plagiarism. When first deliberating the possible relations and the immediate aesthetic, the Detective asks ‘It was definitely murder, but was it art?’

Visitors to the V&A Museum’s major spring show, David Bowie Is… in London this March may find themselves feeling a little like Nathan Adler, as this first major retrospective explores the cultural impact of the musical icon. Curators Victoria Broackes and Geoffrey Marsh will trace the evolution of Bowie’s creative process and idiosyncratic approaches to music, song-writing, video and performance through influences as diverse as German Expressionism, Surrealist assemblage, Brechtian theatre, experimental film, literature, philosophy, French chanson and modern dance.

The show draws on 60,000 items from the musician’s New York collection after the London museum was allowed “one-off” access to the David Bowie Archive. These artefacts will shape a chronology of a career punctuated by collaborations with renowned artists and seminal designers across a variety of creative disciplines. As the first major show since the V&A’s recent renovation of their extensive Fashion Galleries, David Bowie Is… will feature the Ziggy Stardust jumpsuit designed by Freddie Burretti (1972) as well as collaborations with leading names such as Kansai Yamamoto, Alexander McQueen, and Natasha Korniloff.

Bowie’s chameleonic career made accessible to mainstream audiences disparate artistic forms and movements. Emerging in the late 1960s, in the heyday of Pop Art, the breadth of Bowie’s influences reached much further than the Warhol clique. Like many British Pop stars, Bowie attended art school and this significant trend has been seen to issue elements of British pop with a distinct vitality and an acute awareness of the meanings and sense of popular style. David Bowie Is...will reveal the networks and trajectories and the interpenetration of influence and collaboration that led to signature moments in the singer’s career.

Supported by the recent news of Bowie’s surprise musical comeback the V&A are expecting the upcoming exhibition to follow in the global shift back to the ‘blockbuster show.’ In 2011 New York Metropolitan Museum of Art (Met) achieved record attendance figures, thanks in part to the popular Alexander McQueen exhibit, out-trumping those of MOMA’s whose 2011 roster did not include a commercial success like that of their 2009/2010 Tim Burton show. However, following the V&A’s 2006 Kyle Minogue exhibition, many voices are being raised in criticism that major institutions are pandering to a public appetite for celebrity.

The increasing commercialisation of the Art Museum certainly reduces critical distance and advocates mass-market conditions, yet a number of unique institutional concerns are raised by the crossing of boundaries that exemplify David Bowie Is… The V&A’s National Collections of Theatre and Performance have been collecting Rock and Pop material since the 1970s, and Bowie’s relevance to the V&A crosses many other departments of the museum. His influence on music, performance, fashion, visual and virtual culture, links him directly to almost every subject area the museum covers. Responding to these concerns, Co-Curator Victoria Broackes states that ‘We have been careful to avoid the risk that exhibitions with celebrity subjects carry, of becoming a display of “holy relics”. This exhibition is crucially about context, inspiration, process and impact. It seeks to shed light on Bowie’s inspiration, how he works, and how he continues to inspire musicians and designers.’

Despite having all the hallmarks of a retrospective Broackes remarks that ‘The title also puts Bowie firmly in the present tense.’ The upcoming exhibition may well trigger a critical reinterpretation of the musician as a major contemporary artist, one who understood early the pressure points where art and popular culture intersect and, consequently, constructed his work on a system of mutual exchanges with social, cultural, and artistic movements. Recently, however, David Bowie took to Facebook to deny claims that he will be co-curating the exhibition, stating that he did not participate in any decisions relating to the show. Yet as the ever-shifting Bowie myth is driven ever more into the public’s possession, whether or not the man himself sees it as murder scarcely matters.

David Bowie is, at the V&A from 23 March – 28 July 2013, in partnership with Gucci, sound experience by Sennheiser / www.vam.ac.uk/davidbowieis

Marsh, originally trained as an archaeologist and joined the V&A as Director of the Theatre Museum (now Theatre and Performance Collections) in 2003 after a career in strategic planning for the cultural sector.  Broackes, Curator of the Theatre and Performance Galleries, explains the curatorial approach taken by the team to shed light upon the creative processes behind a number of seminal Bowie moments: “An example of this is his sketch design for a Mark Ravitz costume he wore for Saturday Night Live in 1979. We have Bowie’s sketch, the performance on video, the inspirations – Hugo Ball in Cabaret Voltaire and the Dadaist play The Gas Heart with designs by Sonia Delaunay, the originals of which are in the V&A collections, – and to complete the tale even a photograph of Klaus Nomi, Bowie’s backing singer in the performance who went on to make Bowie’s design his own signature costume.”

Once proudly proclaiming “I tend to steal from high art and demean it to street level”, David Bowie has sold more than 140 million albums worldwide and spent five decades in the public eye. Throughout his career he has remained an active supporter of British art. He has served as a contributor and member of the editorial board of the British journal, Modern Painters in which, during the years 1993-1998, he interviewed artists such as Julian Schnabel, Jeff Koons, Tracey Emin and Balthus. A vocal supporter of the “YBA,” or Young British Artists, Bowie also collaborated with Damien Hirst and a number of his pieces of work exist in public and private art collections such as the Saatchi Gallery, London, Jacksonville Museum Of Modern Art, Florida, and the Whitworth Art Gallery, Manchester. As well as creating and maintaining lasting connections to the contemporary visual arts Bowie has also been a life-long collector, owning a diverse range of work, from Tintoretto and Rubens to the likes of Gavin Turk, Gilbert and George, Graham Sutherland and Stanley Spencer.